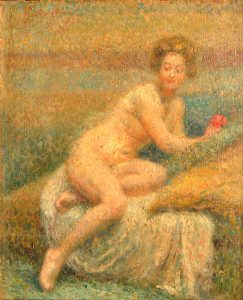 Georges Aufray was Born in 1864 in Ecouen, close to Paris. He was the son and student of the well known Ecouen genre painter Joseph-Anthanase Aufray (1836-around 1885). 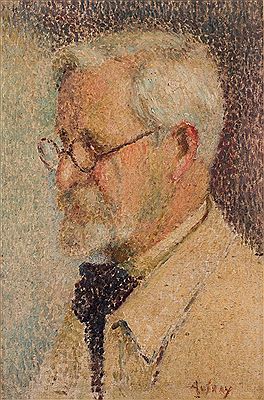 Georges Aufray, „Self portait“, ca. 1930ies, (not in the collection). Source: www.askart.com

From 1928 to 1939 Georges participated at the Salon d’Artiste Francais, Paris, got an honorary mention in 1931 and received a silver medal in 1934. He worked together with his wife, Suzanne Aufray-Genestoux. Georges Aufray is best known for his pointillist landscapes and nudes. He continued his postimpressionist style throughout his whole oeuvre.

Both, Georges and his father Joseph, signed their names as „Au Fray“, which makes them often difficult to identify.