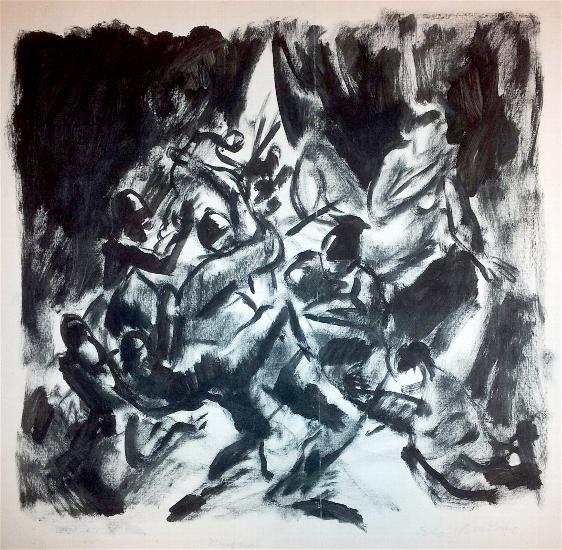 „Samson“, 1918
ink and watercolor on paper, 48 x 63 cm.
The scenery shows the moment, when Samson is captured by the Philisters.

Please refer to Schuberts print „Familiy“ from the 1910s in the section Graphics and Prints.

Comparison of the composition: Francois Perrier (1594-1650), Samson and Delilah,
National Museum Warsaw (not in the collection).

Otto Schubert was born in 1892 in Dresden. He started his studies at the school
of arts and crafts in Dresden and worked as stage designer and painter at the Hoftheater Dresden.
In 1913 to 1914 he studied at the art academy Dresden at the class of Josef Hegenbarth.
After serving in WWI and a severe war injury he continued at the art academy as master
student of Otto Gussmann. He was awarded the „Great State Award“. Schubert continuously
exhibited nationally and internationally, in 1922 for example at the Gallery Alfred Flechtheim in Berlin.
After 1933 he felt the suppressions of the nazi regime.

51 of his works were confiscated in the campaign „degernerate art“ in 1937.
Two of the works were shown at the degenerate art exhibition in Munich.
In the 1945 bombing of Dresden a large part of his oeuvre was destroyed.

After the war, Schubert worked as freelance painter in Dresden. He died there in 1970.