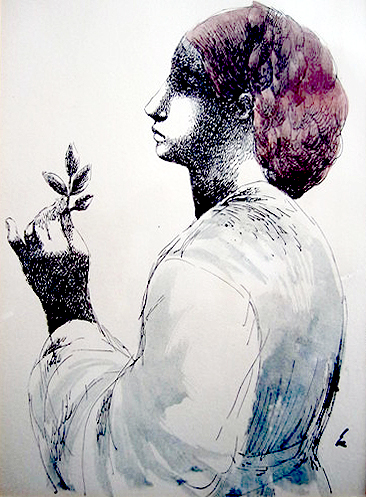 Hanna Nagel was born in 1907 in Heidelberg.
After finishing a training as bookbinder, she studied in Karlsruhe at the statens school of art at Wilhelm Schnarrenberger and Karl Hubbuch and later on, from 1929 to 1931, in Berlin at the painting class of Hans Meid and as master student of Emil Orlik.
She married the graphic designer Hans Fischer in 1931. In 1933 Nagel gained the Rome award and spend time at the Villa Massimo in Rome.
In 1935 she was awarded the Durer prize and the silver medal for graphic art at the 1937 world exhibition in Paris.
A large part of her oeuvre was destroyed in 1944. After the war, Nagel worked as freelance graphic artist and illustrator.
In 1975 she died in Heidelberg.